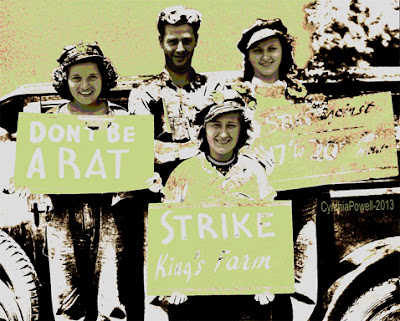 I found this image recently.  It's from the Library of Congress-(public domain).  It is from the mid 1930's when half the country was unemployed.  These young adults were suppose to be on strike and this was probably a propaganda image for the times since this photo would have cost them their jobs.  What struck me was the wages.  17 cents an hour.  I started working when I was 15 back in the late 60's and I was paid $2.35 an hour.  Took 30 years to raise the wages $2.18.  That averages out to approximately 7 cents per year!  It's been another 40+ years (at about .12 cents per year) and what are the wages like today?
World-Wide Poverty for the masses.
I usually don't get on the soap box, but heck why not stir the pot occasionally.  :-D
Posted by Cynthia (Cindy) Powell at 9:40 AM