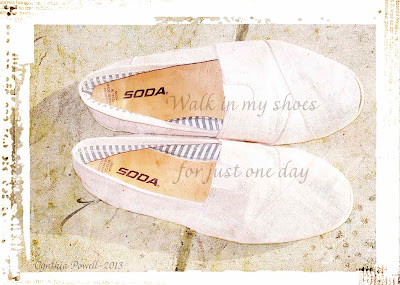 I am ahead of myself this week in my postings, but I don't want to play catch up later.  I altered this image this morning using the word prompt: "Found".  When I saw these shoes in the park this past fall, I knew I just needed to grab a couple of shots to have for a future project.  I started a series of photos over a year ago when I started walking in the park every day.  I was enjoying the fact that I was witnessing new discoveries that others had left behind.  I have quite a collection of photos now but I still enjoy the park.  I've started taking photos of my favorite tree to chronicle it throughout the four seasons.  Another series!
I used a free texture from KimK called: Fall-In.  Kim hosts weekly challenges on her blog like Bonnie at PixelDust, but Kim's challenge is called Tuesday Textures.  I used one of Bonnie's textures in this layout also called: Heartache by the Number.  Can you see all the graffiti on the sidewalk, well most of it is gone now, blending modes will do that, but there's a tad bit left. It's another fabulous free texture.
Posted by Cynthia (Cindy) Powell at 9:26 AM

Such a perfect shot, and perfectly processed! Love all the shades of white and cream!