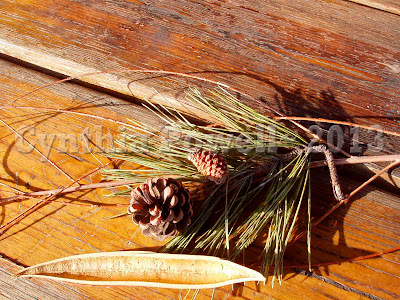 I missed Bonnie's challenge last week st PDP and this week her challenge is "Collage".  I love collage, all sorts of collage, but photos of collage are not something I normally do.  I have been doing a series of photos that I call: "Lost & Found" which are of items I find at the local park on my daily walks.  I gathered up some of the things I found, such as the broken pine branch that still had pine cones attached, along with a beautifully shaped seed pod and a few dried pine needles.  I assembled them on one of the picnic tables, to create this first collage. 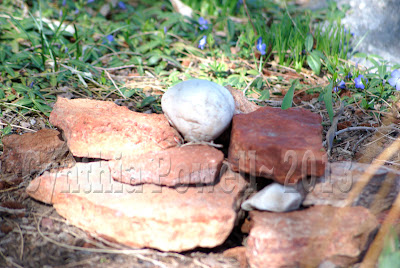 The second collage is one that I built in the front flower garden a few years ago and I always try to capture it year after year when the new flowering buds first open in the spring.  It looks very peaceful & zen like to me.
There are days when the neighboring teenagers sit on the lawn and talk to each other after school and I worried that one of them would dismantle my creation given time.  To my surprise, one of them left me an addition to the structure.  The small white stone tucked in at the right.

I never worried about the neighborhood until a few months ago when someone came onto my porch and stole one of the black metal stars I had hanging outside my front door.  I blame it on someone who perhaps just moved into the neighborhood, a young teen maybe, someone who wanted it and took it for a prize to show off to his friends.  Perhaps it was a challenge given to him by a peer, who knows.  It was along the lines of a prank I'm sure.  So to find this new addition to my collage of rocks, gave me a sense of good Karma again.  "What goes around, comes around."  Thanks!

What a lovely idea - capturing 'finds' from a walk. I especially like the first photo.

It is disconcerting to experience theft even of something small. Perhaps it was just some kid walking through your neighborhood.

I do that too, collecting things from a special time, and it always reminds me of that time when I see it! Lovely, oh and wonder if you have thought of turning off word verification. I have tried 3 times to get this through....

Cindy, I think these are just stunning. I like that you come back and photograph the stone collage each year.

Very nice pieces. The mixture of textures in the first piece is visually interesting and I like the tradition of your stone collage. How nice that someone added to it.