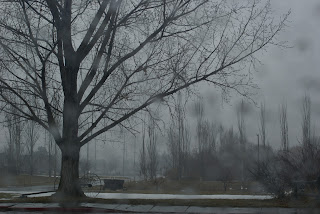 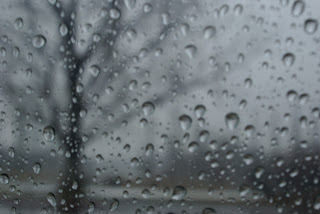 I know I am way ahead of myself, but that's because I will be away from my computer for a few days and when I get back to it, I will be caught up instead of way behind.  I hope to have some more interesting images to share with you then.
While I was at the Farmers Market this past Sunday, it was softly raining.  I find it interesting that people in general, tend to either love the feeling of the atmosphere when it rains or they don't.  This day I was enjoying it to the fullest.   It was the very first time I actually took photos while walking in the rain and  I had specifically planned on shooting images while it rained so I came prepared with very large umbrellas.  I didn't want my camera lens to have water droplets on it, but I did want shots of the water droplets.  Dilemma solved.  I asked my DH not to turn on the windshield wipers until I grabbed a few shots first.  So, sitting inside the car I got the best shots of the day.  By using various settings on the camera I was able to get these two awesome images.
I love both of them and have no favorite here.  The first one is so soft and the fog so gentle.  The droplets barely visible on the glass.  The second is so distorted the whole of it is lost except the basic shape of the tree.  I have to admit, it was fun playing in the rain.  I had a wonderful time experimenting with settings and posing my DH in some of my shots.  (I'll share one or two of these images, at a another time.)
PS-These images are straight from the camera, no apps or other alterations were made.
Posted by Cynthia (Cindy) Powell at 7:01 AM