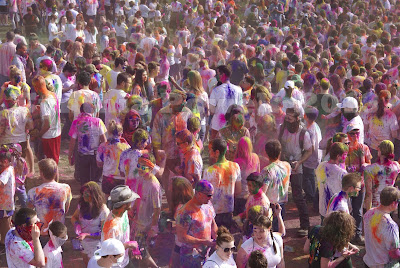 Have you ever been to a "Chalk Festival"?  this photo was taken an hour before the festival began, so
if you plan to attend one in the near future, I have a few tips for you.  Here's some advice from a Mom:
1. The chalk washes off your clothing pretty easily in hot water and bleach so wear white.  (It also shows the colors better!)
2. Do not take an expensive camera with you, plan to plastic wrap whatever you take!  Be prepared to clean it thoroughly when the festival is over.
3. Baby wipes are great for removing the chalk from your face and camera clean-up. There are also areas that you can have someone blow the chalk off of you with a leaf blower afterwards, but plan to wait in a long line or cover your car seats with plastic bags and clean the car later.
4. Wear protective gear-eyeglasses, sunglasses, or even those protective goggles because this stuff burns when it gets into your eyes.  And it will, because the focus of 90% of the chalk throwing, is to get it into your face.  (I think the reasoning behind this, is that the head is the highest part of your body and the chalk will fall with gravity.  But the chalk also produces a fog like cloud of dust all around you.)
5. Anyone with breathing problems is highly advised and greatly recommended you avoid this festival like the plague or suffer the consequences of needing your inhalers or nebulizers afterwards.  You will be blowing colorful snot from your sinuses for days! Paint masks are sold pretty much anywhere the chalk is sold.  Good idea to get one for everyone who goes to the chalk party with you.
6. If you have sensitive skin, avoid this activity.  You will end up with rashes wherever the chalk has touched your skin.  It doesn't hurt, nor does it harm you.  You just get a raspberry like rash on the surface that disappears within a couple of days.
7. The chalk is harmless, except it is made from corn starch, which is a drying agent.
8. The chalk is thrown every hour in a designated area, however, nothing is off limits and chalk is thrown all day long.  People get restless and bored, so they tend to incorporate their own ideas of what a chalk festival should be.  Don't be surprised if you are standing around with a target on your back, front, side, butt end.  Everything is fair game.  Like they said, there is no personal space once the festival begins so have a ton of fun and play nice.  :-D
Update-A recent comment suggested that this photo might be hacked, so I have added a nearly invisible logo.  Sometimes we forget that not everyone is as honest as most of us and we are dealing with a world wide audience.  Thanks for the reminder that we should protect our images by applying logo/copyright symbols that represent our legal rights.   :-D
Posted by Cynthia (Cindy) Powell at 10:08 AM